Before the COVID-19 pandemic shocked the automobile industry, electric cars were quietly gaining traction. For the first time in 2019, cumulative yearly sales of battery electric cars and plug-in hybrid electric vehicles surpassed two million vehicles. Even if the much-anticipated milestone has been clouded by economic uncertainties and shifting consumer preferences, it is still worthwhile to assess the electric car industry.

In the past few years, the EV market has made great strides, and not just in terms of sales. From R&D to factory restructuring, original equipment manufacturers (OEMs) have committed billions to provide new electrified models. Consumer sentiments have changed throughout time. Interventions by the government have pushed ahead and pushed back. COVID-19, on the other hand, dramatically affected worldwide sales and manufacturing. In this case, a new course of action is needed to be put in place for accelerated adoption.

Our team at GEVS has made some predictions on how the EV industry will shape up over the next decade after looking at the present status of the market globally and noting the many elements promoting growth in various directions. Traditional OEMs, new-entrant OEMs, captive financing institutions, and dealerships will all face substantial possibilities and problems as EVs expand in popularity in the years leading up to 2030. In a turbulent competitive market, conventional OEMs will discover insights in this blog that will help them re-prioritize their strategies and objectives. By exploring the current insights, We can push beyond the barriers the pandemic has brought and march into a future where EVs take centre stage.

Despite the short-term effect of COVID-19, the EV industry’s cumulative achievements over the past two years give hope: a pattern of ongoing development that is likely to be sustained into the 2020s. In 2019, sales of BEVs and PHEVs reached two million cars. Looking back at BEV sales in 2019, they accounted for 74% of worldwide EV sales, up by 6% points over 2018. Manufacturers were convinced to favour the manufacturing and sale of zero-emission automobiles as a result of tougher European emissions rules.

Another aspect is China’s advanced BEV market in comparison to the rest of the globe. Sales of electric vehicles increased by 15% in 2019 compared to 2018, owing to an increase in BEVs in Europe (+93%), China (+17%), and ‘other’ regions (+22%). The market for BEVs in the United States, on the other hand, declined by 2%. Then, in the first half of 2020, COVID-19 reduced or stopped the increase of electric vehicle sales in many locations.

According to the BNEF analysis, the penetration of electric cars is quicker than previously assumed, thanks to government decarbonization plans, lowering battery prices, and a rising range of models supplied by automakers. Based on “proposed and verified laws” in those regions, the auto industry anticipates EVs to account for 20-30% of sales in the United States, the European Union, and China by 2025. President Joe Biden has set a goal for electric vehicles to account for 50% of new passenger vehicle sales in the United States by 2030.

According to BNEF, 2021 has been “yet another record year for EV sales globally,” with 5.6 million units shipped. According to the corporation, this represents an increase of 83% over 2020 revenues and a 168% rise over 2019.

The worldwide trend towards zero-emission vehicles (ZEV) has “increased dramatically” in the two years following COP25, according to BNEF. They’ll “take a larger percentage of passenger car sales sooner than predicted.” The businesses stated that the long-term outlooks for battery electric and fuel cell car adoption “have gotten more positive in the previous two years.” According to BNEF’s prediction for the worldwide passenger and commercial ZEV fleet in 2040, there would be 495 million cars on the road. By 2040, it anticipates 677 million automobiles.

Decarbonizing transportation is critical to meeting climate targets and limiting global warming to 1.5 degrees Celsius (2.7 degrees Fahrenheit) beyond pre-industrial levels by 2050, according to experts. Light-duty passenger cars account for roughly half of all CO2 emissions from the transportation industry, which accounts for 24% of worldwide CO2 emissions. Without governmental intervention, Bloomberg New Energy Finance (BNEF) predicts that CO2 emissions from these cars would continue to rise until 2030, after which they will begin to decline as the EV industry matures — albeit not quickly enough to significantly reduce sector emissions by 2050.

China continues to lead the electric car industry, accounting for half of all sales

The electrification race is still going strong. While Tesla is undoubtedly the most talked-about issue at the moment, there appears to be little coverage of the measures that Chinese firms are taking in the field. Despite the fact that Chinese ICE vehicles aren’t game-changers in the industry just yet, the country is a major player in the EV sector. Between January and September 2021, global sales of pure electric passenger cars totalled 2.97 million units, according to JATO Dynamics statistics. The total was 149% more than the previous year’s volume during the same time period. When compared to the total market’s sluggish growth of only 11%, the rapid acceleration is impressive. 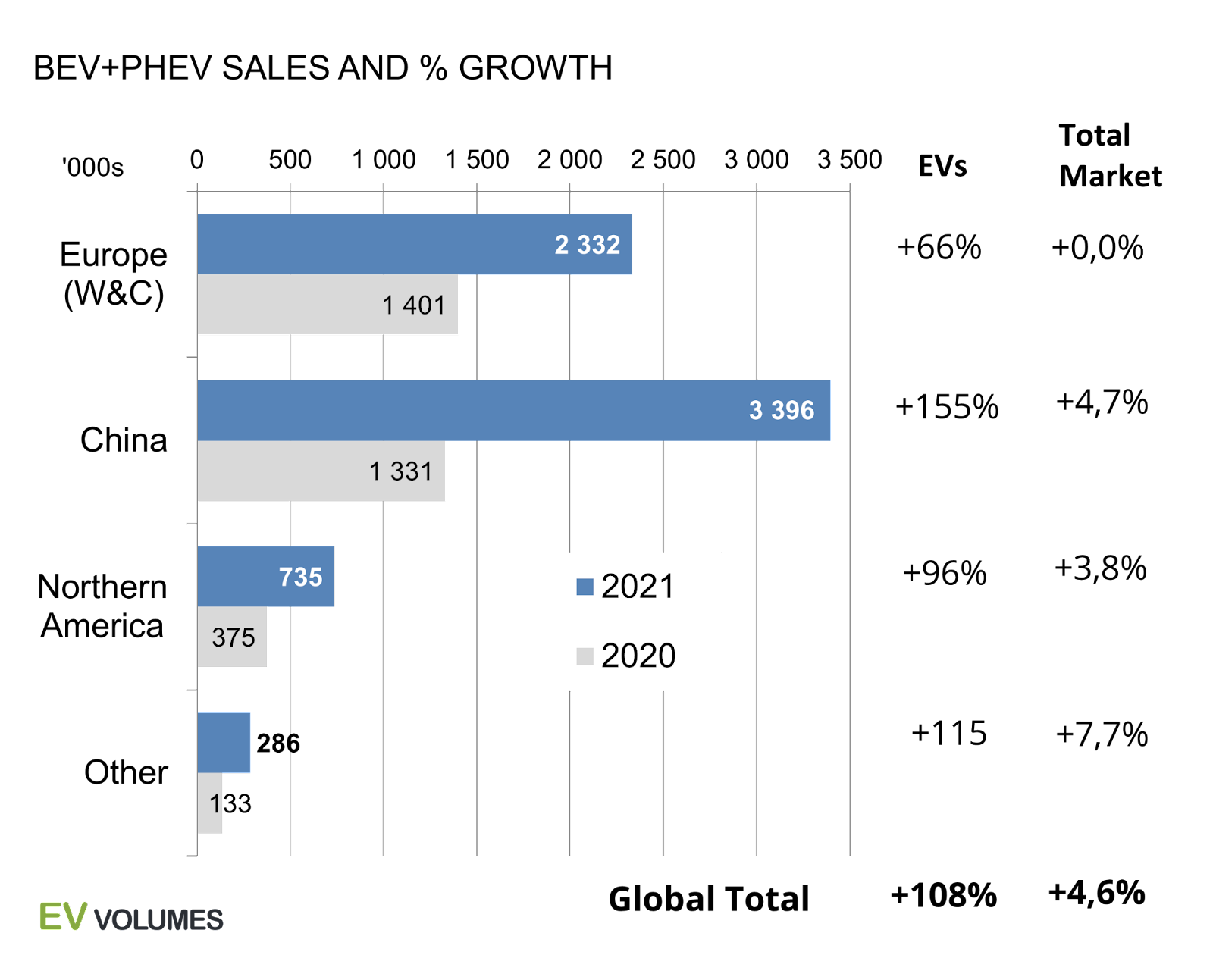 Nearly 500 Chinese electric vehicle manufacturers are vying to be the next Tesla. The luxury NIO ET7 car, which boasts a unique battery-swap technology and a 150 kWh solid-state battery with an amazing 1,000 km driving range, is the best-selling $4200 Wuling Hongguang Mini EV. However, China’s EV sector will confront a lot of obstacles in the future. By 2025, the nation wants NEV sales to have increased fourfold, accounting for 20% of all new car sales. However, the government plans to phase off direct EV subsidies in 2022, and the impact on sales is unknown. Without robust government assistance, including the extension of China’s already extensive public EV charging network, EVs would struggle to expand outside the country’s main cities.

In 2019, Europe’s electric vehicle market grew much faster than that of other areas. The Nordics and the Netherlands continued to lead the way, with Norway capturing 56% of the market share and BEVs accounting for two of the top ten best-selling automobiles in Holland. While the United Kingdom and a few other nations had triple-digit growth. The causes were favourable government policies and a shift in consumer attitudes, fueled principally by rising worries about climate change.

Climate change has quickly risen to the top of many European governments’ priority lists. The United Kingdom committed to a net-zero emissions target by 2050 and recommended a 2035 ban on the sale of all polluting automobiles. In comparison to 1990 levels, Germany wants to reduce greenhouse gas emissions by up to 55% by the end of 2030, and up to 95% by the end of 2050.  Despite the growth shown in 2019, widespread acceptance of electric vehicles has been hampered so far by a lack of models available in the European market and customer perceptions of insufficient charging infrastructure in some areas.